What is the Best Sound Machine for Baby?

You might think that having your baby wake up and cry throughout the night, every night, is just part and parcel of being a new parent. Well, I’m here to tell you that…It is. Yeah. No getting around it. Sorry.

There are decent ways to make the whole process smoother and ensure a better night’s sleep for the new born in your family, though. It doesn’t all have to be late nights and whispered prayers for sleep.

How do sound machines help my baby?

Sound and white noise machines work in much the same way for a baby as they do for restless adults – note, off the bat that these devices are perfectly safe for babies, as long as you take volume into consideration. Remember that your baby’s senses are still in their own infancy and loud noises may cause distress, anxiety or even some hearing damage if something is ridiculously loud.

However, the benefits of a baby noise machine are numerous. Sleep is one of the most important parts of a newborn’s development – they can sleep up to sixteen hours in a day (if you’re lucky)! Using any kind of noise machine that can promote an undisturbed, deep and long sleep is going to be a huge positive for any restless babies and parents alike.

Additionally, because white noise and sound machines create a uniform wall of sound, they’ll shield your baby from any aural disturbances in the night, not only cutting down on any stress or night time scares for your baby, but also allowing you to go for a tinkle in the middle of the night without walking on egg shells.

So, all that being said – let’s take a journey through some of the best noise machines for your baby on the market today!

What is the best sound machine for baby?

When it comes to baby sound machines, there's quite a variety on the market. 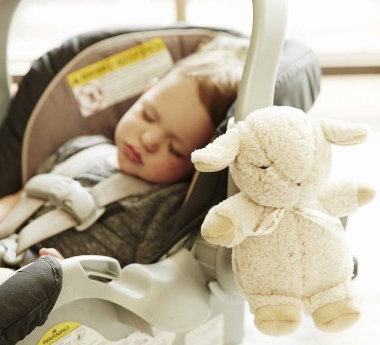 Warning: you’ll be tempted to buy this product purely due to how cute it is… Which might actually be part of the manufacturer’s plan. The Sleep Sheep is a cleverly disguised, fairly rudimentary sound machine which sits in the lining of a fluffy sheep doll.

The machine itself comes with four different sound options – all of them being soothing nature sounds (gentle stream, a summer shower, ocean waves and, bizarrely, whale sounds). There must be something to their strange choice of soundscapes, though, seeing as the Sleep Sheep has been awarded several industry awards such as the National Parenting Council’s Seal of Approval.

All of this being said, this device is very much a portable/travel product – given its limited number of sounds and its only real adjustment being volume control. The Sleep Sheep is advertised as being the perfect fit for carrying in diaper bags, and also runs on AA batteries rather than mains power.

All of this may be fine for parents planning a trip, but it might not be the best fit for a more domestic setting, where customers tend to favor something with more variety and the assurance that the power won’t run down during the night.

On that note: there is no continuous play mode on the sound machine itself; only the option of two timed modes. On the one hand, this actually serves to solve the battery issue, by preserving power but on the other: many babies respond better to sound therapy when the noise is constantly running throughout the night until morning.

As a final note, the price is a little bit steep for a noise machine with such limited capacity and customization but it may be worth noting the craftsmanship in the cuddly stuffed sheep that you’re purchasing at the same time. Plus, over a thousand happy reviews can't be wrong. Read what other parents have to say! 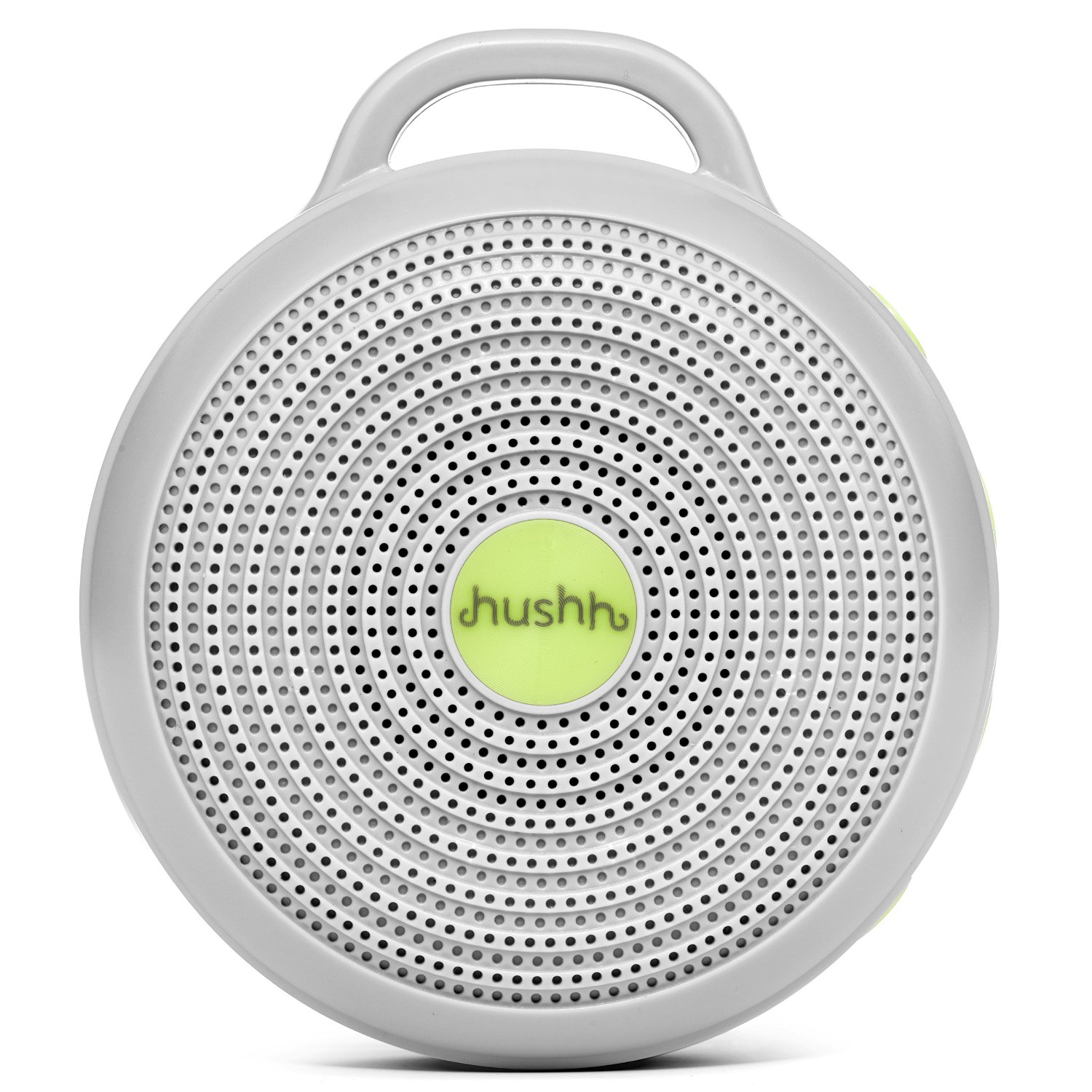 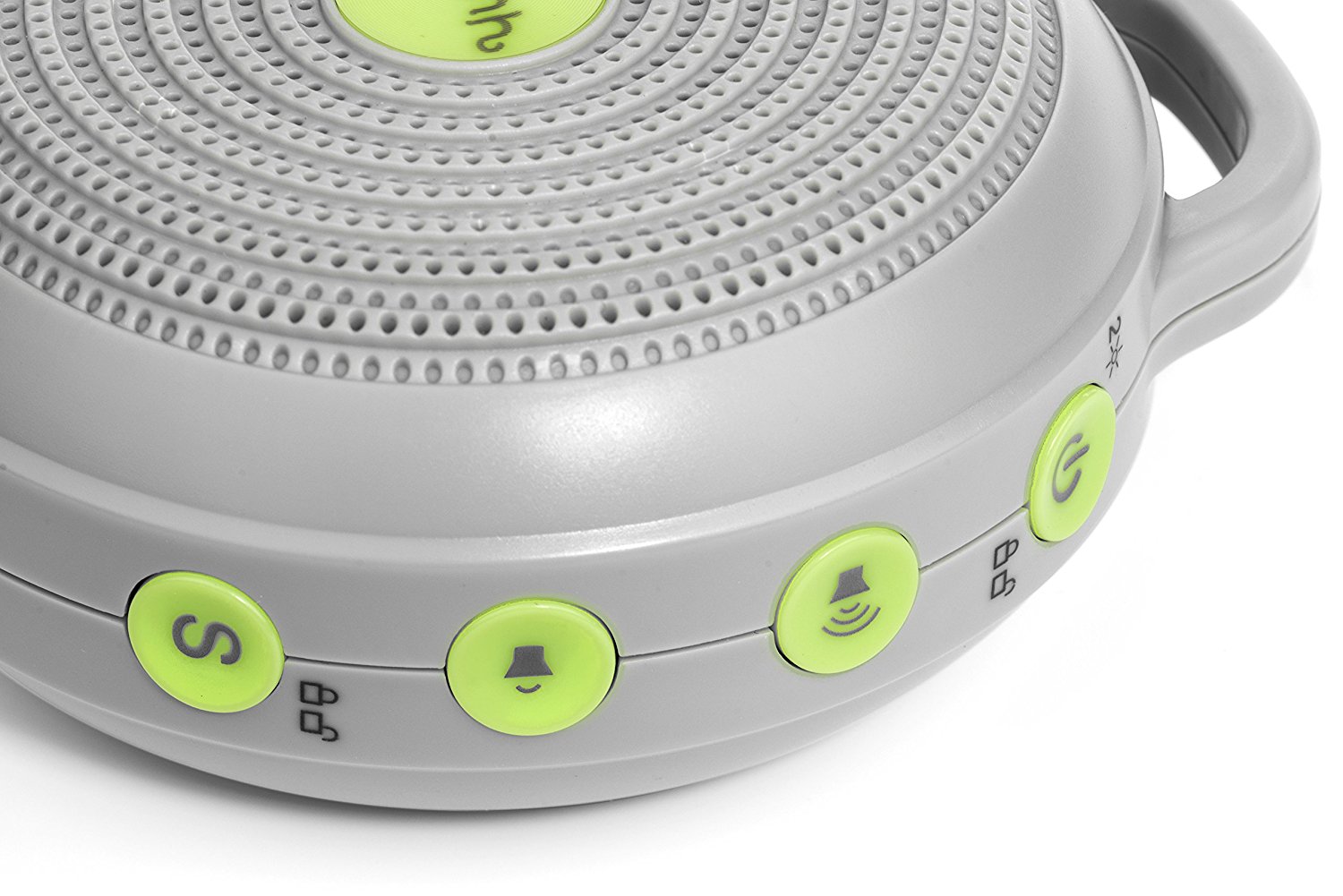 It’s a common brand name for anybody familiar with the white noise market – so it should come as no surprise that Marpac have designed a noise machine for babies. This model is another portable electric number.

The Marpac Hushh comes with three sound options – slightly more technical this time, with a bright white noise, a deeper white noise and the third choice of gentle surf. Now, although this is quite limited with regard to sound design, the Hushh does come with some interesting extras that other brands have overlooked.

For example, this device comes with a child lock to prevent any inquisitive babies from accidentally turning it off or messing with volume controls on their explorations, as well as an amber LED night light built into the machine itself.

This product also embraces its portable/travel design by including a child-safe clip for attaching the machine to strollers or car seats, as well as coming with a USB rechargeable cable rather than standard battery power.

Criticisms of the Hushh aren’t too dealbreaking or surprising. Obviously, the three sound selection is incredibly limited compared to some other white noise machines on the market, and some users have complained about the nightlight being a nuisance (there’s no ‘off’ selection, meaning customers have to blank the bulb themselves somehow).

That being said, if you're looking for the soothing simplicity of white noise that you can take on the go, this is a great option. Read all user reviews! 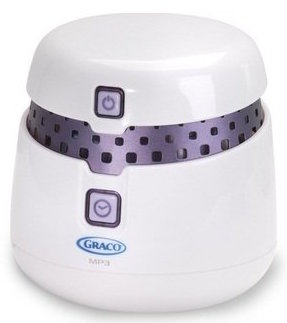 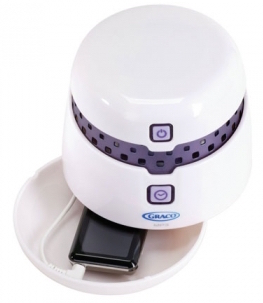 The first thing you notice about Graco’s Sweet Slumber machine is that it’s straight to the point – no messing about. The aesthetics of this device are more in line with an air freshener or soap dispenser or something, rather than a baby’s sleep aide.

That being said, what it lacks in design, it makes up for in functionality: it comes with a much more respectable twelve choices of sounds, as well as an MP3 plug-in to allow you to choose your own audio, if you want to change things up a little.

Much like the Hushh, this device also comes with a mild nightlight built in; working in tandem with its off-timer countdown. Luckily this device runs off of either batteries or mains power, depending on your preference, meaning it straddles the divide between a portable machine and a more stable domestic noise device.

All of this being said, there are reports that the built-in sounds are prone to very obvious loops and patterns in their structure; this is quite a big complaint for some more adult white noise machines (the mind has a tendency to focus on patterns in sounds, meaning it could potentially keep you awake, rather than send you off to sleep).

However, it’s not clear if something like this would be as big of an impediment to a small baby as it would to a grown adult.

Customers will also run into the same potential issues with this device’s nightlight as they may do with Marpac’s Hushh device (the bulb on the Graco Sweet Slumber is a blue colour, to boot), so it’s worth considering what you actually want from the machine as a whole before purchasing, especially since it's a bit more expensive than the others. Read all user reviews! 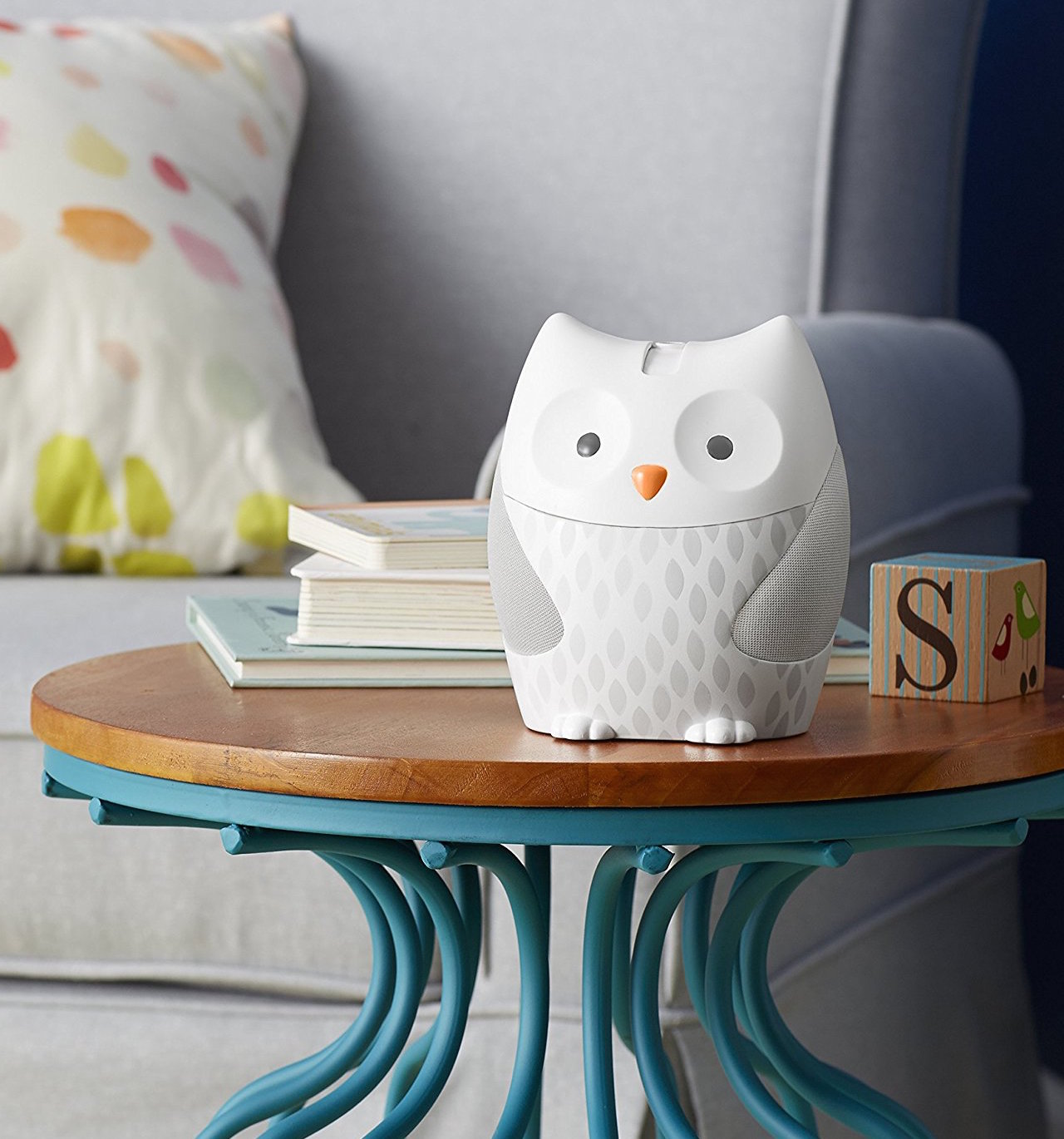 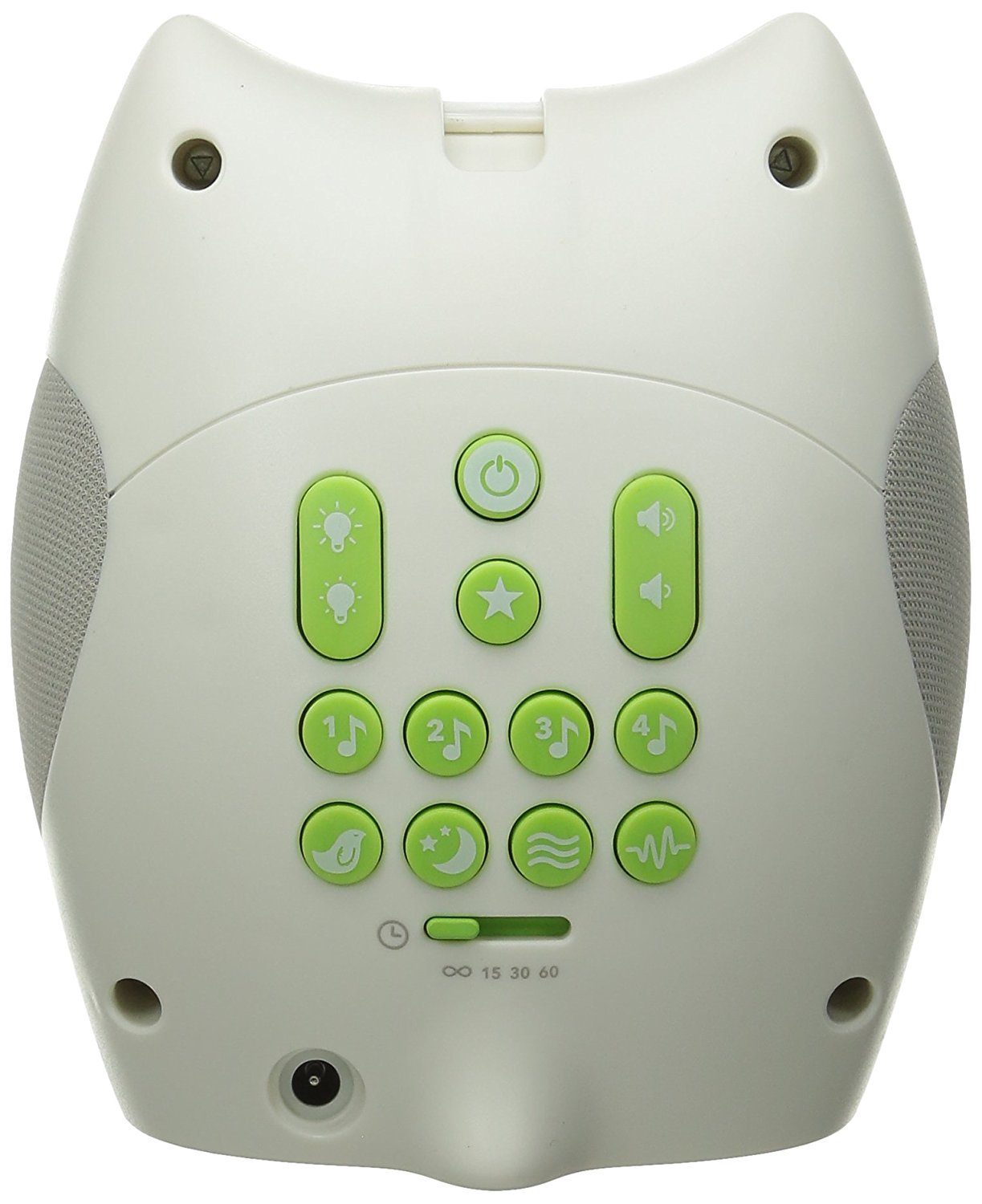 We’re firmly back into childlike territory here with the Skip Hop Unisex Soother…in the shape of a cool little owl. The design is actually rather clever, allowing not just for a pleasant image but also some technical gadgetry, such as an LED (dimmable) nightlight and an adjustable lens which projects stars on the walls or ceiling.

What’s interesting about the function of this device is that Skip Hop have combined tradition with modernity in their sound design. The Soother offers a choice of four melodies including Twinkle Twinkle Little Star and Rock-a-bye Baby, as well as another four nature soundscapes (rainforest, jungle crickets, waves and white noise with a heartbeat).

The customization allows parents to essentially create their own little light show with the ceiling/wall lens and the choice of sounds – and an off timer with staggered selection; 15, 30 or 60 minutes.

There is one potentially major drawback with this device, however. Rather than running on batteries or simple mains power – this sound machine plugs directly into the wall socket. This might make the projector aspect a little more interesting, but it seems destined to hamper sound quality if the machine is tucked away in a corner somewhere and of course, makes it difficult to use on the go.

As you might expect from the level of design and customization in this device, the price is a direct reflection. That being said, this is still cheaper than some other models with less functionality on the market. Read all user reviews!

Our final product is the Baby Shusher (points for no-holds-barred naming, at least, huh?) – an interesting looking device that resembles some sort of orange bowling pin – this might be an important design choice however, given the type of sound this machine makes.

As the name may suggest, this isn’t a simple melody player or white noise machine, instead the shusher does exactly that… it shushes. The whole concept is based upon Dr Harvey Karp’s principle of the “Five S’”, the fourth of which is shushing.

Essentially, the noise is a long, drawn out shhhhhh type of sound which is meant to remind the baby of some of prenatal sounds of being in the womb, with a relaxing rhythm specifically designed to promote calm and relaxation.

Although this device comes with a volume control, the philosophy behind the device seems to state that the volume should be louder than the baby’s cry… of course the volume is entirely down to your own discretion, but it’s worth remembering that very loud noises can be harmful to a new born in the wrong context.

Additionally, the Shusher is another battery powered device that, even with its two timer options of 15 and 30 minutes, will require lots of switching out of fresh batteries if used regularly.

The Baby Shusher retails at a bit above the market average, which makes it feel like a very specific, almost bespoke product, given its limited ability (shushing and nothing else)… It seems like a device targeted at parents who are on the lookout for this very thing, rather than new parents looking for a customizable, varied noise machine to experiment with. This may be worth keeping in mind. Read all user reviews!

Hopefully this guide through some of the more popular baby sound machines will have cleared up the grey areas for you – there’s much to choose from and many different directions to go in, but really it all comes down to what you want and expect from your machine.
Best of luck!

Popular
Recent
Does Sleeping Help You Grow Taller? 0 comments
The Ultimate Guide on How to Take Melatonin for Better Sleep 0 comments
What’s the Best Tea to Help You Sleep? 0 comments
12 Incredible Benefits of a Good Night’s Sleep 0 comments
How to Lose Weight While Sleeping 0 comments
How Many Hours of Sleep Do I Need? 0 comments
Sex and Sleep: How a Lack of Sleep Affects Your Sex Life 0 comments
12 Easy Ways to Stop Snoring 0 comments
How to Get Out of Sleep Paralysis: 6 Techniques that Work October 16, 2016
How an Acupressure Mat Stimulates Sleep Pressure Points for Better, Deeper Sleep October 14, 2016
What is the Best White Noise Machine? (and Why You Want One) October 12, 2016
Can Babies Have Nightmares? September 17, 2016
Best Blue Light Blocking Glasses for Sleep: Your Best 3 Options September 15, 2016
What is the Best Sound Machine for Baby? September 12, 2016
12 Home Remedies for Sleep that Will Knock You Out In No Time September 9, 2016
Best Sleep Mask Reviews: How to Choose the Best Eye Mask for Sleeping September 7, 2016