Well, yes and no. Studies have begun to show that filtering out particular parts of the color spectrum (namely bluer hues) can actually improve the body’s melatonin production, thereby helping us with our messed up, modern, LCD-plagued sleep patterns. The most efficient way to filter these colors out? blue light blocking glasses.

First off, it’s important to acknowledge that our bodies have a natural, internal clock which regulates our circadian rhythm (essentially the ‘rhythm’ of our bodies as a whole) – sleep helps to keep this in check. The big problem is that most of us aren’t getting anywhere near the right amount of sleep on a regular basis, and a whole host of health problems are on the increase as a result.

It’s thought that the reason for such an upsurge in restlessness amongst our modern society (setting aside lifestyles and 24/7 work schedules) is our constant exposure to digital media and screens, which emit lots of this blue light, tricking our minds and bodies into thinking it’s still daytime.

How do glasses solve this?

Now, it’s important not to get the wrong end of the stick with regard to this. Blue light isn’t some evil substance to be avoided at all costs. The body actually needs it and it’s perfectly healthy to have natural exposure to it during daylight hours – sunlight naturally contains it.

In fact, research has actually shown that depression can set in if you starve yourself of natural blue light during day light hours for long periods of time. Ever feel a little down if you’re trapped in the house all day long on a dark, dim, cold winter’s day? There’s part of your answer.

Blue light blocking glasses have been shown to be consistent in their sleep improvements to the point that some studies have actually shown regular wearers to have upswings in mental performance, sleep quality and overall mood.

As little as one night’s poor sleep can have major effects over your mental capabilities and mood; so you can picture the damage that’s being caused if someone is prone to night after night of restless, sleepless tossing and turning. By simply wearing blue light blocking lenses at night time – the problem can, potentially, be held at bay.

Short of simply axing technology after dinner, the tinted glasses can allow for users to still go about their normal digital evenings (laptops, phones, television, even some harsh room lighting) without suffering the same insomnia-esque effects from simple exposure.

Unless your restlessness is truly chronic, simple blue light blocking glasses may be all you need to make a drastic, yet simple nocturnal lifestyle change. That said, the simple color difference is only half the story. Intensity of light, brightness and how long you’re exposed to it can all play big parts in the insomniac side of things – something that tinted lenses can’t compete against.

If you are one of the chronic cases, it may be worth trying to cut down on how much time you spend on LED backed devices come night time, even if it’s just small decreases in your habits.

What are the best blue light blocking glasses?

As with anything that shows some marketability, however, orange-tinted glasses are already being monopolized and designed within an inch of their lives… Luckily, we’re on hand to review some of the more popular products on the market for you!

As the title suggest: if you’re a regular gamer or Twitch viewer, it’s likely you’ll have seen these types of glasses make more appearances as ‘equipment’ in the huge upsurge of eSports in the last few years.

The reason, as you might have guessed, is to filter out all of that pesky blue light (bearing in mind that gamers spend hours upon hours upon hours sitting in front of these LED screens). This particular product’s lenses are not only tinted to accommodate the blocking feature, but also have anti-reflective and anti-glare coatings within them, which are fantastic aides for people using screens throughout the day.

Interestingly, a lot of the more popular orange tinted glasses – especially in the gaming scene – are more goggle like in design and thus look…Well, they look awful. This product, however, is much more traditional in style – opting for a sort of classic Rayban design which, apparently, has been much loved by Arnold Schwarzenegger… If it’s good enough for the Terminator etc.

Now, functionality and design of this degree doesn’t come cheap, especially if the Govinator has given them his stamp of approval. Customers looking to try out these glasses will need to part ways with a good chunk of cash to do so.

This is a huge price for glasses that aren’t designed with a bespoke prescription so do consider that you're paying a little more for the brand and design. But hey, if you want a pair of anti-glare, anti-reflective coating blue light blocking glasses that look good enough to wear around the house without hiding your face in shame, these are a winner. Read all user reviews! 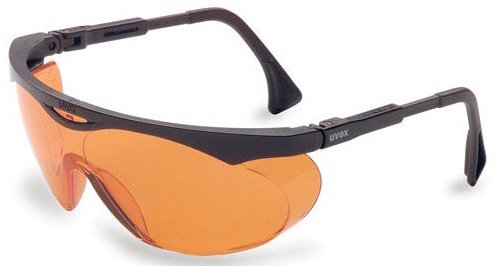 With Uvex’s computer glasses we’re looking at something with function rather than form in mind during the design and manufacture process. These glasses are very much back in the ‘goggles’ territory in terms of aesthetics, actually resembling something similar to ski sunglasses.

However, what they lack in style they make up for in practicality. The powerful lenses are designed to absorb 98% of blue light emitted from LED devices – a huge number compared to some less proficient models on the market.

Further still, the actual legs of the glasses are situated upon an adjustable ratchet, making them closer to a universal fit for a wide range of users, rather than a solid, one size fit, which would rule out a great many customers.

Unfortunately, this also seems to be their biggest criticism amongst unsatisfied reviewers and customers. The functional design is less comfortable than some more aesthetically manufactured glasses available and the cheap and cheerful materials used in the bridge and legwork seems to be prone to damage.

Then again, looking at the low, low, low price, it sort of feels like you can’t go wrong – at least on a trial basis. This seems like the perfect set for somebody who wants to give light blocking eyewear a chance, but would rather remain in the shallow end of the pool.
Essentially, the opposite of the more expensive gamer glasses reviewed above. Read user reviews!

Coming to Spectra’s submission to the amber glasses market, we find something that’s actually a nice blend of the Uvex’s practicality and the gamer glasses’ style – this more sporty frame looks like a fairly typical pair of sunglasses, with the obvious exception of the orange tint.

The lenses themselves are marketed as blocking up to 99.2% of blue light emitted, which make them a very powerful set of glasses if they walk the walk. There’s no real reason to doubt the proficiency of these lenses too much as they, too, are FDA approved and have been rigorously tested in different environments and at a variety of distance ranges from blue light emitting devices.

A big drawback to Spectra’s glasses, however, is their lack of customizability in the frames themselves. These glasses are marketed at one size, potentially cutting off a huge number of customers from taking advantage of them, with measurements of 61-16-129.

This being said, although the legs and the bridge can’t be adjusted, the frames are made from a fairly pliable plastic which allows them to flex a little and (should they work a little too well) withstand a sleeping head crushing them against a pillow.

As an added bonus, the price of Spectra’s glasses is pretty respectable, bearing in mind the decent aesthetics and very powerful blocking lenses. Of course, there’s no anti-glare or anti-reflection coating; simply the blocking tint as promised.

A simple, functional, yet affordable offering to the amber glasses marketplace – Spectra’s glasses feel like a happy middle ground between style and ability. Read user reviews!

Hopefully this article will have cleared up the confusion and mystery behind orange tinting and the power of blocking out blue light waves when it comes to getting a decent night’s sleep – there’s a lot to choose from when you decide to buy your own pair of blue light blocking glasses, just be sure to find the right price, functionality and design for you before jumping in!

Popular
Recent
Does Sleeping Help You Grow Taller? 0 comments
The Ultimate Guide on How to Take Melatonin for Better Sleep 0 comments
What’s the Best Tea to Help You Sleep? 0 comments
12 Incredible Benefits of a Good Night’s Sleep 0 comments
How to Lose Weight While Sleeping 0 comments
How Many Hours of Sleep Do I Need? 0 comments
Sex and Sleep: How a Lack of Sleep Affects Your Sex Life 0 comments
12 Easy Ways to Stop Snoring 0 comments
How to Get Out of Sleep Paralysis: 6 Techniques that Work October 16, 2016
How an Acupressure Mat Stimulates Sleep Pressure Points for Better, Deeper Sleep October 14, 2016
What is the Best White Noise Machine? (and Why You Want One) October 12, 2016
Can Babies Have Nightmares? September 17, 2016
Best Blue Light Blocking Glasses for Sleep: Your Best 3 Options September 15, 2016
What is the Best Sound Machine for Baby? September 12, 2016
12 Home Remedies for Sleep that Will Knock You Out In No Time September 9, 2016
Best Sleep Mask Reviews: How to Choose the Best Eye Mask for Sleeping September 7, 2016